I really liked seeing the posters again. There were some items, in the Professor article, with which I really didn’t… The Peace Corps, a service organization run by the U.S. government that dispatches volunteers to foreign countries, is on hold because of the coronavirus pandemic. For the first time in its nearly 60-year history, none of its volunteers is stationed anywhere.

To many Americans, the Peace Corps represents the best of American generosity abroad. That’s in line with its stated mission to promote world peace and friendship.

But having researched the Peace Corps’ backstory while studying the messages in its early advertising, I see this pause as a chance to learn more about how it came to symbolize U.S. goodwill abroad in many Americans’ minds. I’ve learned how American perceptions of the agency were shaped by ads promising heroic adventures to the volunteers who signed up.

In an academic article I wrote about the publicity campaign for the Peace Corps in the first decade of its existence, I explained that Peace Corps advertising emphasized myths about heroes, adventure and the benefits of gaining worldly experience without ever mentioning the word communism. But fighting communism was among the agency’s original foreign policy purposes, according to many Peace Corps historians and other scholars.

Given the growing counterculture movement in the early 1960s, the government feared that few young Americans would be motivated to join the Peace Corps by a message that they’d be volunteering to help to fight communism. For that reason, the advertising strategy focused on promoting heroism while promising adventure and career advancement to potential recruits.

At the time of its creation, two institutional forces shaped the Peace Corps advertising campaign – the foreign policy goals of John F. Kennedy’s administration and the Ad Council, a nonprofit the advertising industry created during World War II to aid the U.S. government’s communications efforts.

Building on the image of Kennedy as a romantic superhero, as public intellectuals like the writer Norman Mailer described him at the time, the JFK administration positioned the Peace Corps as an opportunity that would help lead America into an audacious future.

The Peace Corps advertising campaign helped attract more than 14,000 American volunteers who trained or worked overseas in 57 countries from the start of the program in 1961 to November 1968. It also artfully masked one of main Kennedy’s foreign policy objectives for the program: preventing developing countries from adopting communism.

To date, more than 235,000 Peace Corps volunteers have served in 141 countries

Did you know: the Peace Corps doesn’t have an upper age limit. More experienced Americans bring a valuable set of skills and perspectives to service. #TBT 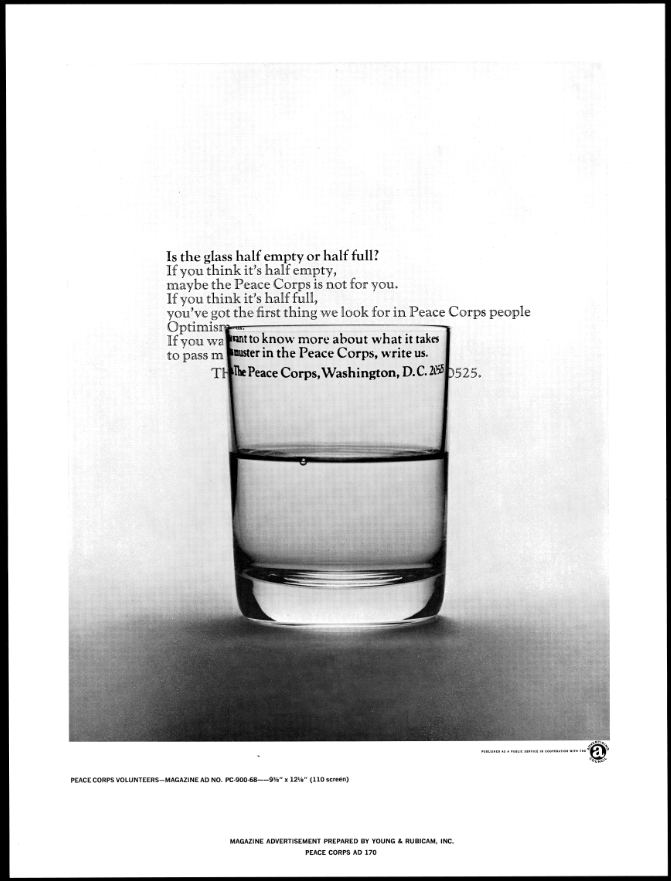 We couldn’t think of a time better than #OlderAmericansMonth to share some of our favorite vintage PSAs. Which Peace Corps ads made an impression on you over the years? 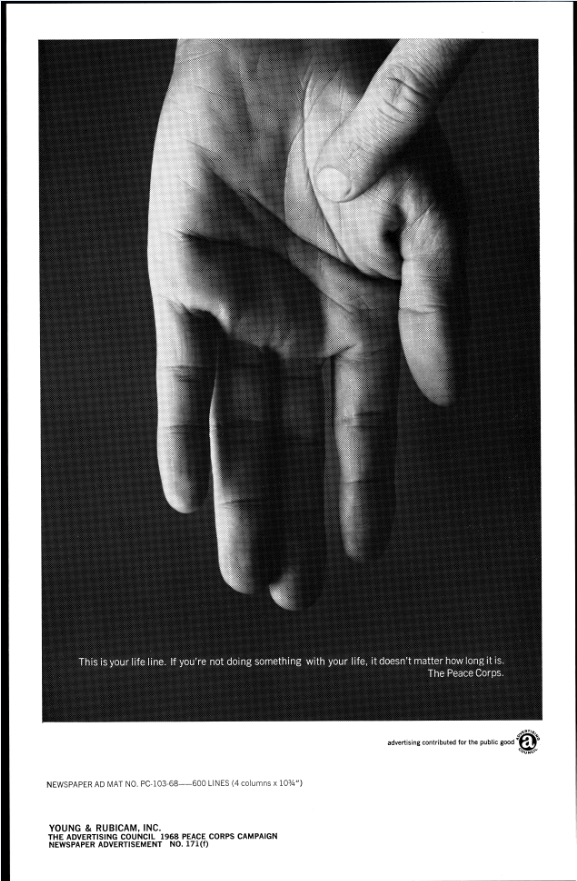 Concerns about communism dominated American culture and in the popular press and media throughout the 1950s and 1960s. America also needed to counter growing Soviet efforts to place young people from the USSR who were highly trained in local languages and customs in developing countries.

Kennedy worried that as the Third World gained independence from colonial empires, the developing countries would be vulnerable to communist influences. This posed a threat to American and European security.

As the historian Elizabeth Cobbs put it: “The Peace Corps owed its existence to the Cold War and to Kennedy’s belief that the United States had to do better in competing with Moscow for the allegiance of the newly independent countries of the Third World.”

The handbook for Peace Corps volunteers instructed them to study communism “as an ideology and as an organizational weapon.” The handbook advised that “communists are against the Peace Corps and its program,” and that the communists considered volunteers to be “spies and agents of imperialism.”

The Peace Corps also encouraged its volunteers “to answer our detractors through hard work and accomplishment” instead of engaging with them in debates.

The Ad Council sponsored the Peace Corps campaign until 1991. Earlier, it had played a key role in shaping U.S. attitudes about communism, socialism and capitalism through campaigns that promoted America’s economy as the cornerstone of American capitalism.

The council’s 1948 campaign to “Explain the American Economic System,” which ran until 1951, and its traveling exhibition called “The People’s Capitalism,” which explained the American economy to other countries, are a few examples.

The Peace Corps’ earliest promotional materials never overtly raised the specter of communism. Instead a series of ads and posters called on Americans to participate in a program that would make their life more meaningful by making a difference in the world.

Those early Peace Corps ads encouraged volunteers to embark on a grand adventure that sounded like a fun extended study abroad program.

“Do you have your future mapped out?” read the copy in one 1961 print ad launching the campaign. If not, have you considered America’s exciting new Peace Corps? It’s an exciting and stimulating life, and best of all, you will be helping your own country as you help the people of other countries.“

By the end of the 1960s, the messages embedded in the individual ads appealed to youthful idealism, patriotism, a desire to see the world and the hero myth without references to the struggle against communism being waged in the Vietnam War.

In a 1968 “Human Care Package” magazine ad, a young man crouches inside a wooden box stamped “made in the USA.” The copy reads: “There is a man somewhere who has nothing … Send him the one thing only you can give him. Send him you.”

Americans in the turbulent 1960s wanted to believe that their country played a morally good role in the world. The Peace Corps program and its advertising helped convince them that this was true.