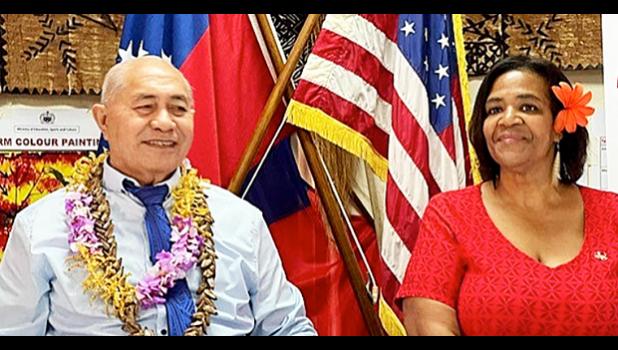 Samoa’s Minister for Education Seuula Ioane and US Peace Corps country director Gini Wilderson at the signing of a five-year memorandum of understanding (MOU) to continue their partnership. [photo: US Peace Corps]
Apia, SAMOA — U.S.  Peace Corps volunteers are returning to Samoa by early next year with the hope of improving English literacy for many young Samoans and other youth around the Pacific.

The Samoa Observer is reporting that during the Pacific Islands Forum Leaders Meeting this year, U.S. Vice President Kamala Harris had announced the return of the Peace Corps to the region, something which had been stopped due to the COVID-19 Pandemic and as a political decision by the then administration.

Following the intensifying of geopolitical tension in the region with China, the U.S. has sought to bring the volunteers back as a means to have more engagement in the region.

On Dec. 1, 2022, the United States Peace Corps and Samoa’s Ministry of Education Sports and Culture signed a five-year memorandum of understanding (MOU) to continue their partnership.

The MOU was signed by the country director of the US Peace Corps, Gini Wilderson and the Minister of Education Sports and Culture, Seuula Ioane. The signing was witnessed by Michael McCabe, Peace Corps Regional Director, and Tuaopepe Perenise Tinei, the Deputy Chief Executive Officer of MESC.

The U.S. Peace Corps have brought nearly 56 years of service to Samoa, with the first volunteers arriving in 1967.

Nearly 2,000 Volunteers have served in Samoa since that time in the agricultural, engineering and public health sector. The batch of volunteers that would arrive in February 2023 would primarily be engaged in education.

The English literacy rate in Samoa has been identified as a field that needs the attention of the expertise offered by the Peace Corp volunteers. They will work with teachers and schools to improve the English literacy of primary school students, including raising reading scores, establishing school libraries and inspiring a love of reading.

“The renewal of this MOU extends a valued partnership and program that has shown measurable results,” said Peace Corps Country Director Gini Wilderson.

“We look forward to delivering on this important agreement, in collaboration with MESC, over the next five years.”