Definitely one of America's greatest sculptors, ever. In show after show over decades he has proved to be so. I'm… 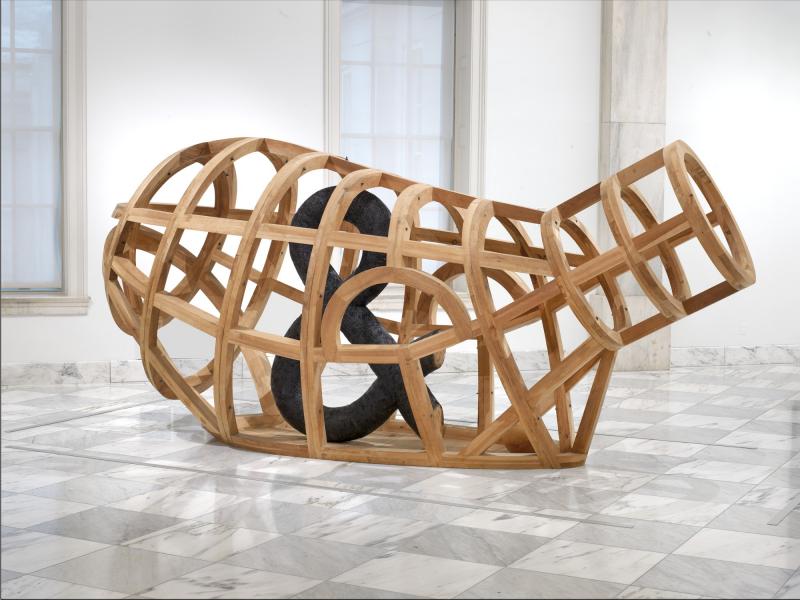 One of the most important American sculptors working today, Martin Puryear (Sierra Leone 1965-66) is known for his handmade constructions, primarily in wood. After studying painting at Catholic University in Washington, DC, he traveled extensively — teaching in Sierra Leone with the Peace Corps, studying printmaking in Stockholm from 1966 to 1968, and visiting Japan through a Guggenheim Fellowship in 1982 – experiences that have shaped the artist’s practice. He creates abstract forms that are evocative and familiar, yet elude singular interpretations. Motifs like human heads, ladders, and vessels take on symbolic resonance, and function as meditations on powerful universal concepts such as freedom, shelter, sanctuary, migration, mobility, and equality.

In Vessel, a form lies facedown on the ground, the neck and crown rising up in opposite directions, like the bow and stern of a ship. Contained within this openwork structure are a solid wooden sphere that resembles a period and an ampersand that swells to fill much of the interior space. Vessel remains open to multiple interpretations. Some describe it as a bottle washed up on shore, its cryptic message legible through its latticed encasement. For others, the title refers to sinister human trafficking; the black ampersand – suspended by a metal shackle –suggests a folded body crouched in the hold of a slave ship crossing the Middle Passage. Still others read the form as a human head containing two symbols of written language, a visual metaphor for abstract thought. The artist rarely refutes interpretations of his work, instead he prefers it to accrue meaning over time, as each viewer draws on personal experience and ascribes new significance to his art.