Eric, I would love to read about your impressions of Colombia, today. It is more than fifty years since I… 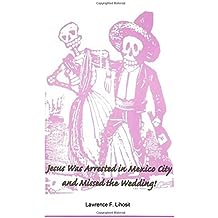 Chucho, alias Jesus, makes a simple but beautiful wedding into possible jail time in Mexico City…DF to locals. But this isn’t the plot, but the title that grabs you before you know what course to take. I have to admit I couldn’t put  Jesus Was Arrest in Mexico City and Missed the Wedding down. Lawrence had me by the “tostones.” And I don’t mean platanos! I read this awesome little book as an introduction to traditional Mexico, or Mejico…Weddings are extremely important to Mexican women, very! In Mexico, any unmarried female over 30 is considered yesterday’s tortilla!

And Mexican traditions are not just this generation, but the time of Pancho Villa, to the Aztecs when they fought Cortez while he and Spain were stealing as much as they could get away with. Pancho Villa, as bad as he was, is still the hero to the gente, people.

Jesus Was Arrested, brought back many great memories and a chance to be back in Mejico. “Silence can be a speech”…my Grandma Julia’s exact words. Or take me to Garibaldi Plaza to hear real music…near the Camino Real hotel for sure.

The poor Canadian getting married missed out on life in Mejico because he did not speak Mejicano. Perhaps getting married during Day of the Dead could be something to remember! Thanks, Lawrence, or is it Lorenzo? I would expect that you may consider another book to bring us up to date.

Awesome story to tell, Fernando made it real.

Bob Arias (Colombia 1963-65), is a third-generation Mexican-American from East Los Angeles. He was a PCV CARE Rural Community Development PCV in Colombia, an APCD  in Colombia from 1968 to 1973, and Peace Corps Country Director in Uruguay and Argentina from 1993 to 1995. He returned to work at the Peace Corps from 2001 to 2003 assisting in establishing the agency’s Safety and Security Office after 9/11. Now retired from Los Angeles County where he was the County’s Compliance Officer. Bob served as a Peace Corps Response Volunteer since 2009, in Paraguay, Colombia, and now for a second time, in Panamá.