Great story. My Dad (Jerry Connolly), was the one that finished third in this race. He like Reggie, grew up… 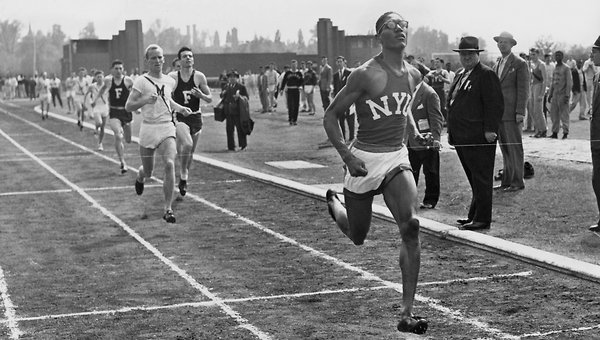 Reggie Pearman, one of America’s outstanding middle-distance runners in the post-World War II era, winning multiple titles for New York University, died on Monday near his home in Silver Spring, Md. He was 89.

The cause was complications of pneumonia and renal failure, his daughter Lydia Pearman Harris said.

Dave Johnson, the director of the annual Penn Relays, one of the premier track and field events in the United States, called Pearman “one of the all-time greats in relays.” Pearman was elected to the Penn Relays Wall of Fame in Philadelphia in 1994.

For all his accomplishments, however, Olympic success eluded him. Interviewed in 2007 by The Times, Pearman recalled his disastrous experience in the 880-yard run at the 1948 United States Olympic trials.

“In my first heat,” he said, “I was spiked in the right Achilles’ tendon and didn’t finish. I asked the doctor if I could run when it got better, and he said he hoped I could walk normally. In other words, he said running was over for me.”

A year later he was running as fast as ever, and in 1952 he made the team for the Helsinki Olympics, but his experience in the same race there was similarly disappointing.

“I finished seventh in the final,” he said. “I ran a lousy race. Those guys didn’t sit around and wait for me. They had their own races and raced them.” Pearman was a close friend of Charlie Jenkins, the 400-meter champion at the 1956 Games in Melbourne, Australia. Jenkins would play an important role in his life.

“I more or less retired from running after the 1957 season,” Pearman said. “My first kid had been born, and I had a whole lot of other things going on. Then Charlie Jenkins recruited me for the Peace Corps. I had been teaching social studies and health education for 10 years at a junior high school in Queens, and the Peace Corps offered me more money than the principal was making, so I took it.

“They sent me to Venezuela, and later I worked for the United States Office of Education. I was promoted to branch chief, the highest nonpolitical job, and I stayed there until I retired.”

After receiving a bachelor’s degree from the N.Y.U. School of Education, he did postgraduate work and earned his doctorate in educational administration from the University of Massachusetts. He went on to teach graduate and doctoral students in education at Cornell, California State University and elsewhere.

Reginald James Pearman was born on May 23, 1923, in Manhattan and raised in Jamaica, Queens. His first race was in a high school intramural meet in 1941.

“I think I ran the 440,” he said. “I didn’t set the world on fire, but the next fall I was on the high school cross-country team, and I won the New York City title my freshman year.” He then joined the New York Pioneer Club, one of the first racially integrated track and field organizations.

Despite his promise, N.Y.U. did not recruit him; he joined its team as a walk-on. And he had no guidance on seeking scholarships elsewhere. “My parents came from Ethiopia,” he said. “They didn’t understand what a scholarship was.”