RPCV Poet Paul Violi (Nigeria 1966-67) died of cancer on April 2, 2011, writes William Grimes in an obituary published on April 15 in The New York Times. Grimes says: “Violi was a poet with an easy, conversational style and satiric bent who reworked arcane historical verse forms and invented his own in poems that mimicked glossaries, errata slips, travel brochures and cover letters.”

Selected Accidents, Pointless Anecdotes published by Hanging Loose Press in 2002, Mueller wrote, “If you need to laugh at the absurdity of life during these dark days, I recommend that you run out and purchase this edgy, hilarious book by Paul Violi. But be forewarned: don’t expect frivolous humor. The unnamed narrator of each story has the sensibility of a twisted, paranoid imp. His is the deadpan voice of a jaundiced observer whose life is permeated with accidents, idiosyncratic juxtapositions, and macabre surprises at every turn. Another warning: don’t read this book on a train between New York City and Washington, DC as I did or on any public conveyance unless you don’t mind having the stranger in the next seat eye you warily and shift away as you break into uncontrollable giggles.” 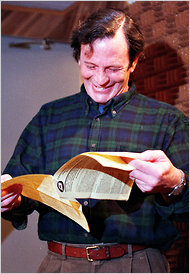 Michael Grimes, in his obituary, went onto write: Mr. Violi (pronounced vee-OH-lee) began writing poetry under the influence of the New York School, sharing its interest in contemporary speech, the visual arts and the urban scene, but he soon embarked on his own wayward path.

“Index,” his most anthologized poem, consists of index entries, followed by page numbers, that hint at the bizarre life and career of Sutej Hudney, a painter and poet. “Arrested for selling sacks of wind to gullible peasants,” one entry reads. Another offers the following cryptic clue: “Dispute over attribution of lines: ‘I have as large supply of evils/as January has not flowerings.’ ”

Mr. Violi adopted the voice of a fey fashion commentator to describe the march of Xerxes’ multinational army across the Hellespont: “Nice fish-scale pattern on those breastplates./Just the right beach touch, very decky.”

And even the somber aftermath of the 9/11 attacks could not prevent him from injecting a wry note into “Sept. 13, 2001”:

I stop
At the West End, keep a weak joke about Oswald Spengler
to myself, and ask Jay to translate
what he’s chalked up
on the slate board behind the bar.
Veni, Vidi, Velcro:
“I came, I saw, I stuck around.

His elegiac or lyrical flights almost inevitably took a sudden absurdist turn, while his most far-fetched conceits could lead to passages of tender description or lyric bursts. In the short poem “Tanka,” for example, he moved abruptly from haiku mode to ransom note:

Where the blossoms fall
like snow on the dock
bring fifty thousand in cash
or you’ll never see your baby again.

David Lehman, explaining his choice of two poems by Mr. Violi for inclusion in The Oxford Book of American Poetry, singled out “his wit, his ability to find the poetic resonance of nonpoetic language, his deadpan and his ability to get serious ideas across without didactic earnestness.”

Paul Randolph Violi was born on July 20, 1944, in Brooklyn and grew up in Greenlawn, on Long Island. After earning an English degree from Boston University in 1966, he joined the Peace Corps and made maps in uncharted regions of northern Nigeria.

On returning to New York, he worked for WCBS-TV and various newspapers and magazines and began spending time at the Poetry Project at St. Mark’s Church in-the-Bowery, home to the second wave of New York School poets.

In the early 1970s, while employed as the managing editor of The Architectural Forum magazine, he published his first poems, collected in Waterworks and In Baltic Circles. His Nigerian experience provided the material for a long poem

With the British artist Dale Devereux Barker, he collaborated on several books that combined poems and images.

Mr. Violi was a poetic reporter and a parodist, always on the alert for the telling encounter, the ripe bit of urban speech, the priceless instance of pop vulgarity. “Counterman,” written in dialogue, records the back-and-forth between a deli worker and a customer whose sandwich request takes an ornate turn. (“The lettuce splayed, if you will,/In a Beaux Arts derivative of classical acanthus.”) The inspiration for House of Xerxes came from a fashion channel that mesmerized Mr. Violi after he signed up for satellite television.

In addition to his wife, he is survived by his mother, Irma, of Ridge, N.Y.; a sister, Anita, of Medford, Mass.; a daughter, Helen, of Girdletree, Md.; a son, Alex, of Brooklyn; and two grandchildren.

“I’m still the willful 12-year-old who wants to do what he feels like,” Mr. Violi said in a 2004 interview with The North magazine. “I still think anything is worth a try, I’m still mixing things up, different genres, forms, styles — different elements — and hoping I don’t look like a mad chemist.”