Thanks for addressing this. I have been confused about this (almost) parallel PC programs and the problems of administering them…

Thank you to RPCV Alan Toth  for highlighting on his Facebook page, Posh Corps : A Peace Corps Documentary, NPR’s Opinion piece about overseas volunteering. The focus is on the industry in which people pay to volunteer overseas on a short term basis. Peace Corps in not included in the critique.  Here should be the link for the article: https://www.npr.org/sections/goatsandsoda/2019/09/12/754347433/volunteering-abroad-is-popular-and-problematic-lets-fix-it

OPINION: Volunteering Abroad Is Popular And Problematic. Let’s Fix It

Have you ever volunteered abroad?

From students and young professionals to retirees, nowadays everyone seems to be trying to make a difference in communities around the world.

But what are these efforts really achieving? Do they help — and if so, who benefits?And if they cause harm, what can we do to make things better?

All important questions, as volunteering abroad has grown tremendously. Estimates suggest the industry is now worth at least $173 billion.

The industry is also coming under increasing fire, owing to questions about the sustainability of volunteer efforts, reports of inappropriate care and service, and unintended impacts to economic and social systems in the communities that host them. 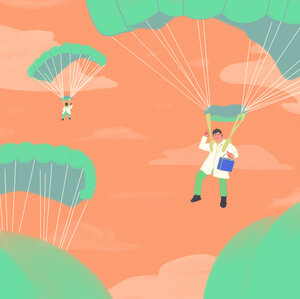 Why Surgeons Are Rethinking The Fly-In Medical Mission

That’s all balanced against a clear upside for volunteers beyond their altruism: training in hard and soft skills, exposure to experiences not seen at home and — of course — an opportunity to travel.

I saw this dynamic play out during my time as a junior resident and volunteer in the early 2000s, working with a group of health professionals and students on an annual excursion to provide care to Haitian economic migrants in the eastern Dominican Republic. A friend of mine who had previously volunteered in the country had been asked by a local hospital to organize the group so they could set up mobile clinics, using secondhand school buses to visit village schoolrooms and churches.

What I saw left me unsettled, leading to a decade of research and advocacy to encourage greater responsibility in volunteering abroad.

Some incidents that occurred during my volunteer stint were relatively mild. We knew, for example, that patients would feign symptoms to obtain free pain killers and multivitamins, which we ended up giving them anyway. I now recognize what a bad practice that was. Patients were being dishonest to take advantage of the volunteer enterprise, and the medications given were not without risks: In excess, acetaminophen can cause liver damage.

Another time, in the absence of clear instructions, villagers used a medicated shampoo as an ingredient in broth instead, rendering the shampoo ineffective and the broth inedible.

Other incidents were more concerning. I remember seeing some of the volunteer physicians on the team occasionally prescribing less-than-optimal antibiotics to some patients that would not be used for the same condition at home. The justification they provided was that “some antibiotic was better than none.”

Most disconcerting was the group of U.S. surgeons who visited the community to provide tubal ligations as a family planning measure. The women they saw were already members of a marginalized community and were now being treated by doctors who did not speak their language but held a certain intangible authority over them — and who, we later learned, may not have fully explained the permanent nature of the procedure to the patients during the consent process.

My experience with skilled professionals who chose to volunteer reinforces some of the broad criticisms leveled against such efforts over two decades, in certain sectors.

In addition, many other concerns arise about volunteers who lack skills or training and act beyond their capacity. Pippa Biddle’s sentinel piece in 2014, which first raised many of these criticisms, highlighted that she had no real skills that could be helpful during her own volunteer experience:

“Sadly, taking part in international aid where you aren’t particularly helpful is not benign. It’s detrimental. It slows down positive growth and perpetuates the ‘white savior’ complex that, for hundreds of years, has haunted both the countries we are trying to ‘save’ and our … own psyches.”

Since then, other critiques of international volunteers — skilled and otherwise — have appeared across media outlets. A sampler over the years: 2014, 2015, 2016, 2017 and even a 2018 op-ed that bills itself as a “response to critiques of critiques.”

These critiques certainly aim to change hearts and minds through education and awareness. But have they succeeded in turning the tide?

I take a different view. Working in public health, I’ve seen firsthand that telling people not to do something usually fails miserably. Risky behaviors such as binge drinking, smoking or casual unprotected sex often continue despite well-crafted, well-intentioned messages.

Road safety efforts in the early 1970s show what can be done in moving away from education alone. At the time, there were approximately 50,000 road fatalities each year in the United States.

Safety advocates had two crucial realizations: first, that cars were probably here to stay, and second, that simply telling people to “drive safely” would not, in and of itself, achieve that behavior.

When it comes to volunteering, there are parallels. Contemporary criticisms simply saying “don’t go, it’s bad” have had limited success in ending such endeavors. A paradigm shift is needed. If we accept that, like cars, volunteering is probably here to stay, I would propose that two questions should be asked of any proposed volunteer endeavor:

A paper that I helped publish proposes a comprehensive approach to moving beyond simple awareness and criticism. Programs at a minimum should ensure their work conforms to the direction of local partners and that volunteers are selected through a stringent, skills-based application process and prepared through extensive pre-departure training once accepted.

There would need to be monitoring, evaluation and accreditation of volunteer programs by an authoritative body that could highlight outstanding efforts and name and shame those that fall short of the bar.

We should also address the motivations for volunteering. Having a volunteer experience on a resume shouldn’t be an automatic bonus when applying to a professional school but rather something to explore, starting with the question: What exactly did you do?

The ultimate goal should be to ensure that these well-intended volunteer efforts responsibly achieve positive, objective change while making it impossible at best, or uncool and unpalatable at least, for any volunteer (regardless of skill level) to haphazardly conduct tubal ligations or hand out random antibiotics.

Dr. Lawrence C. Loh is adjunct professor at the Dalla Lana School of Public Health at the University of Toronto. He previously served as director of advocacy and partnerships with The 53rd Week, a nonprofit based in Brooklyn, N.Y., that focuses on improving short-term volunteering.