MARLBORO — After years of declining enrollment, a renaissance may be underway at Marlboro College.

The number of new students submitting deposits for the upcoming fall term has increased by nearly 50 percent compared to last year, in part due to the success of a new “Renaissance Scholars” free tuition program aimed at drawing students from outside New England.

While much work remains, college administrators say they’re seeing signs of progress — especially in addressing enrollment numbers that recently had dipped below 200.

“From today’s vantage point, I think the future looks very good,” said Montpelier attorney Dick Saudek, chairman of the college’s board of trustees. “With any small liberal arts college, there is always these days a good deal of concern. But Marlboro seems to be very much on the upswing.” 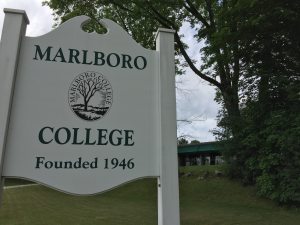 Marlboro College, with its emphasis on small classes and independent learning, doesn’t want thousands of students. But the college’s head count last fall was just 170, down from a high of more than 350 in 2004.

Officials have pointed to the high costs of college as one reason for the national sag in post-secondary education enrollment. In this part of the country, an aging population also is a factor.

For that reason, “our strategy has to be to broaden our recruitment net beyond New England and the mid-Atlantic states,” Quigley said.

Enter Renaissance Scholars, a program that Quigley launched after he became Marlboro’s president in 2015. The initiative offers four tuition-free years to one student from each of the 50 states; in addition to strong academic performance, the program emphasizes qualities such as community service and leadership.

Though the program started relatively late in the recruiting season, it has made an impact: Marlboro has 74 new students who have been accepted and submitted a deposit for the upcoming term, up from 50 at this time last year.

Though enrollment numbers are not finalized, Quigley is projecting that Marlboro’s head count will be between 190 and 195 this fall. That could represent a 12 to 15 percent increase over last fall’s number.

“The (enrollment) trend line was downward, so at a minimum we needed to halt that,” Quigley said. “We’ve halted the downward, and we’ve got some modest but significant uptick.”

Also notable is the fact that the incoming class, as currently constituted, represents 34 states. “That’s really encouraging,” Quigley said. “Renaissance Scholars has allowed us to expand our geographic reach.”

While only one student in each state could gain free tuition to Marlboro under the Renaissance program, Quigley said there’s been a spillover effect among applicants “who did not win that scholarship, but they’re still coming to Marlboro.”

The program has had enough success to spur trustee approval of another round of Renaissance scholarships. “I think it’s more than accomplished what it was originally intended to do,” Saudek said.

“Every indication,” he added, “is that the campus is going to have more people and more vitality.”

Although Marlboro is giving up tuition payments from its Renaissance Scholars, Saudek said the school is gaining far more, both in terms of student body diversity and marketing for future students. “It broadens the reputation of the college. If they get inspired, they will spread the word,” he said.

That kind of promotion may be particularly important for Marlboro, which markets itself as a close-knit, intentionally small learning community in a rural setting.

“What’s behind that is a very high-powered faculty, a very small student-to-faculty ratio and a great deal of individual attention to the students,” Saudek said. “It’s not an easy ‘elevator pitch’ or an easy branding tool. It’s something that comes from word of mouth.”

Quigley wants to reach many more potential Marlboro applicants, as he believes the college is built to ideally host 275 to 300 students. So administrators are pursuing other growth strategies, including broadening the college’s financial aid packages to lessen out-of-pocket responsibilities.

“That kind of removes one of the barriers for many middle-class families to have their children come to Marlboro,” Quigley said.

Other initiatives include attracting more veterans. That’s a nod to the campus’s heritage: A majority of the college’s first class in 1947 consisted of World War II veterans.

“We did secure some funding for us to set up a pilot program over the next three years to begin to recruit veterans,” Quigley said.

Funding, of course, is key for Marlboro’s future. The fact the college exceeded its $1.85 million annual fundraising goal this year is “really a significant step forward,” Quigley said.

He added that, like student recruitment, fundraising will always be a work in progress.

“There’s no goal line in this,” Quigley said. “We just have to keep working away on it.”

By Mike Faher who reports and writes for VTDigger