Good for you, Leita dear! I wish they'd come to Jacksonville - the only yellow shirt I have says Afghanistan…

I’m a Mom Who Came Out to Protest for Black Lives in Portland. I Was Shot by Federal Agents Our president wants you to believe I am a terrorist, a professional agitator stalking the Pacific Northwest.

Four days before federal agents shoot me in Portland, Ore., I riffle through the garage, shooing spiders from my son’s snowboarding helmet. Will it buckle beneath a steel baton? I press my daughter’s swim goggles to my face, testing the fit. Can they repel tear gas? I run my hands over my husband’s life jacket. Can it stop a bullet?

I don’t yet realize how many other moms are slipping oven mitts into backpacks (to minimize burns when tossing aside flaming grenades and tear-gas canisters), how many dads are hoisting leaf blowers from sheds (to clear tear gas), how many teens are gathering plastic toboggans to shield themselves from officers in combat fatigues aiming stun-grenade launchers through temporary fencing around the federal courthouse. This is what happens when you rattle the barricade that policymakers hide behind, screaming “Black lives matter,” protesting for 60-plus nights the brutal tactics officers use to kill Black men on camera and Black women in beds.

The night I am shot, the sky shimmers with a leftover Fourth of July firework lit by a privileged son whose college closed in the spring. He is here because Black lives matter to him but also because he senses the video game he now plays nightly has sprung to life and he won’t be left out. That boy is pretext, he and his friends tossing plastic water bottles at stone walls, justification for an elite force to quell a gathering of Black people and their allies at the door of the same courthouse where four years earlier the white militiamen who led an armed takeover of another federal building in Oregon were acquitted of any wrongdoing in a 41-day siege. 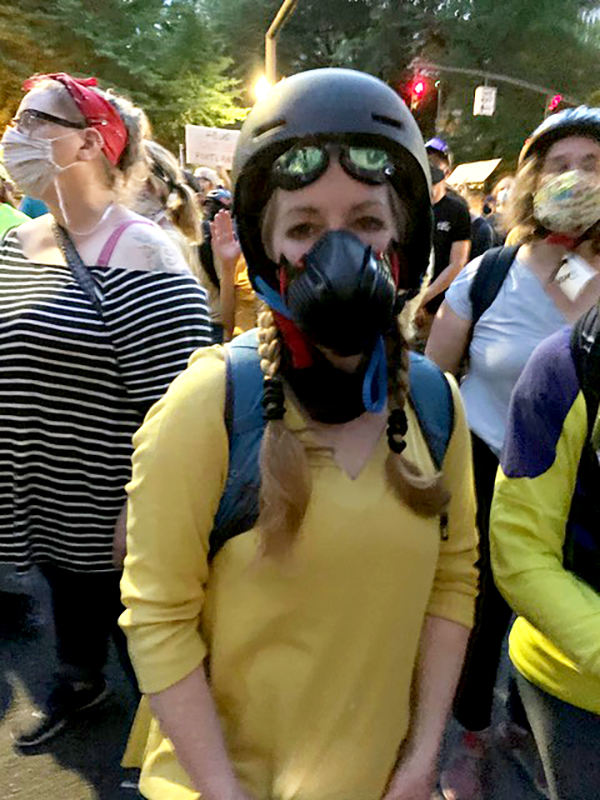 I listen to a Black man on the Justice Center steps invoke the memory of John Lewis while thousands of doctors, veterans, teachers, attorneys stand peacefully, our hands in the air. It is Lewis’ words–“Freedom is the continuous action we all must take, and each generation must do its part to create an even more fair, more just society”–that echo as the gas swallows me. I feel men crashing into me as they flee pepper bullets and fires from flash-bang grenades, dragging choking, bleeding bodies away, but I hold my ground because I know the law: a federal injunction prohibits the use of gas unless the lives or safety of the public or the police are at risk, and that is obviously not the case here. I listen and am prepared to obey dispersal orders from authorities, but they never come.

But I am also naively stunned by the suspension of my lifelong privilege. Those federal agents are the brothers-in-arms of men I love–my father the Navy submariner, my former father-in-law the disabled Marine, the police officer I swooned over in my youth–and I am a white woman, the high school cheerleader those feds once fell for, the sorority girl they courted, the one person those officers truly referred to when they swore an oath to serve and protect. If they are willing to turn on me, to fire on me, for finally breaking my silent complicity and standing with and for my Black neighbors, what havoc will be wreaked on the Black bodies left behind if I vacate this street?

For a second the gas lifts, and it seems there are only a few women left, standing arm in arm in the yellow shirts those agents know mark us as mothers, just empty asphalt between us and the men some other mothers raised.

And that is when they shoot us, point blank, with impact munitions. The woman on my right falls forward; the woman on my left is struck in the head; I feel my bone break. My right ankle is encased in a bulky cast after a fall the previous week, and those American sons shoot my other foot out from under me.

Today, now that federal agents have withdrawn, our protests go on peacefully. But America, be wary. Forget Portland at your peril. Everyone thinks they’d have joined the Resistance if they lived in 1940s Europe, when we know that most stayed inside, served supper, tucked the children into bed with a kiss and a lie: “All is well, close your eyes.”

Don’t wait to be knocked off your feet. It may be you they aim for next.

Ellen Urbani is the author of Landfall, set in the wake of Hurricane Katrina – a Women’s National Book Association Great Group Reads selection and winner of the Peace Corps Writers Maria Thomas fiction award – and the memoir When I Was Elena, a Book Sense Notable selection documenting her life in Guatemala during the final years of that country’s civil war. Her writing has appeared in The New York Times, The Rumpus, numerous anthologies, and has been widely excerpted. A grief & trauma specialist, she’s served as a federal disaster consultant and her work has been profiled in the Oscar-qualified short documentary film Paint Me a Future.