KIM HERMAN, I agree it's a great story and for me at least a GREAT example of reading a narrative…

The news coverage in Detroit also featured the moment JFK announced the Peace Corps at the University of Michigan. After Kennedy’s death, the idea of serving in the Peace Corps stuck with me.

I spent most of my childhood in libraries, a safe space for a young girl in inner-city Detroit. I would often skip school, take public transportation downtown, and spend the day in the public library. It was easy to walk in with a group of school children and go unnoticed. Once inside, I could ditch the group and make my way to the card catalog. I was fascinated by all the cards in the big wooden cases. I was too young to truly understand what I was seeing, but somehow I knew that those cards held knowledge, and that knowledge would get me out of Detroit.

My route from the Detroit Public Library to library school was a long one. I was 17 when I saw an

Karen Jean Hunt began serving in the Air Force at the age of 17.

ad in TV Guide offering free medical, dental, and a monthly salary of $280, all in exchange for enlisting in the military. I filled out the information card and mailed it. The postage was free.

Weeks later, I received a large brown envelope with more information and the phone number of a local military recruiter. In 1974, the United States was looking for females to enlist. I met with the recruiter and was told to gain weight and finish high school. At the end of our meeting, he telephoned my mother. She arrived, had a short conversation with the recruiter, and signed me into the Air Force.

I loved basic training. Back home, I shared a basement room with my mother. Our room was next to a room with two male renters. In basic training, I slept in a bay with 24 other women. I felt safe.

On my 17th day of basic training, I learned that my mother lost her sight due to glaucoma. When my instructor told me I was being sent home, I cried. Luckily, my teacher found out that one of my mother’s eyes could be saved, making it possible for me to continue with training.

I was assigned to Norton Air Force Base in San Bernardino, California, as a key punch operator. I spent my days in a warehouse, punching holes into card stock to store information. After a year, I was transferred to the warehouse next door, where I pulled and shelved parts for aircraft. My new position meant lots of TDY (temporary duty travel). My first overseas assignment was in Okinawa, Japan. When stateside, I was a member of the military funeral detail for Los Angeles County. Performing this duty was the highlight of my military career.

After using my G.I. Bill benefits to complete my undergraduate degree, I worked a summer job in a library. One weekend in July 1985, I saw the Live Aid famine relief concert on TV, which triggered my memory of the Peace Corps. The following Monday, I walked to Peace Corps headquarters and filled out an application.

Karen as an English teacher in Kenya.My first Peace Corps assignment was in Kenya, where I wrote a grant to start a school library. With the project up and running, I wrote a second grant to build two 40,000-liter water tanks. The water project was the first step towards providing real meals at the school.

In 1988, I returned home, completed two graduate degrees, and began a career as an academic archivist/librarian. On February 28, 2017, I retired from Duke University.

Three weeks later, I began training for Peace Corps service in Armenia. There, I worked with two British volunteers to host summer English clubs. We worked out of the Red Cross soup kitchen in my host town. Prior to lunch service, we would recruit students from the neighborhood to join us for games and English language instruction.

My time in the Air Force prepared me for deployment in a variety of locales. The military also taught me that basic training is not technical training school, and tech school is not like your permanent base. All those steps are simply part of a process. In the Peace Corps, there’s staging, then pre-service training, and finally life in your permanent site. I was never one to get caught up with trying to race through one step in order to get to the next. And, of course, my military experience meant that I didn’t have problems with following rules. I was 30 when I arrived in Kenya. In Armenia and Ethiopia, respectively, I was 60 and 62 when I arrived. I found the combination of being a veteran and being older helpful. Just one month after completing service in Armenia, I finally fulfilled my original goal and arrived in Ethiopia as a Peace Corps Trainee. In Ethiopia, I acquired three book donations, one of which included a complete set of encyclopedias. I had plans to encourage students to use the new books in the school library and begin a school gardening project when the COVID-19 pandemic hit. I was evacuated, nine short months after starting my third Peace Corps service

My jobs in the Air Force and as an academic librarian included international travel, and also gave me the financial means to vacation abroad. I have traveled to 48 states and 42 countries. But it was only as a Peace Corps Volunteer that I was able to live with a family, learn another language, and integrate into a new culture at a standard of living unknown to most Americans. That’s what makes serving in the Peace Corps so special. Peace Corps helped me to see the world and my place in it differently. 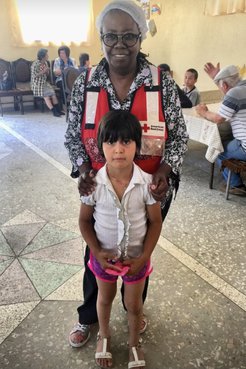 Being in the Air Force changed my life. After leaving the military, I was able to use my G.I. benefits for college, have my dream career, travel the world, and have an amazing life. Serving my country, in uniform or as a Peace Corps Volunteer, is really all the same to me. It has been my honor to do both and I will continue to serve.

Karen Jean Hunt served as a Peace Corps English teacher in Kenya from 1986–88, and went on to serve as a TEFL Volunteer in Armenia (2017-19) and Ethiopia (2019-20). Prior to the Peace Corps, she served in the United States Air Force and went on to earn a bachelor’s degree in English from California State University Long Beach, a master’s degree in public history from Wright State University, and a master’s degree in archives and library studies from University of Michigan. She retired from a career as an academic archivist/librarian in 2017.