You know, it's not about assaults happening to a PCV overseas, it's really about how PC deals with the PCV.…

[On December 9, 2010, four of the First Response Action Coalition members met with several Peace Corps officials in Washington, D.C., including the Deputy Director and Chief of Staff.  Peace Corps shared several ways that they are moving forward with items on the 7-Point Plan, including a form of the Survivor Bill of Rights.  Peace Corps committed to follow-up with materials and updates.  Here is a report from that meeting, written by Casey Frazee.]

It was a cold, snowy day in Washington, D.C. when four members of the First Response Action Coalition, the volunteer board which manges First Response Action, met with Peace Corps officials at Peace Corps’ headquarters. Representatives from the Office of Medical Services, Safety & Security and the Office of Special Services were in attendance as well as the Chief of Staff, Deputy Director and an official whose position is focused on examining Volunteer and staff sexual assault training during Pre-Service Training(PST) and beyond.

While Casey and Jess focused on the human cost of the lack of consistency with current protocols, Karen, with her background as the Program Manager at the Colorado Coalition Against Sexual Assault, focused on best practices in the field and models to work with survivors. Kate outlined resources available to Peace Corps and discussed items that would strengthen survivor support resources, such as a non-Peace Corps staff advisory committee and the review of training and support materials by best-practice agencies in the field.

Peace Corps briefed the Coalition members on their current changes in training and response to survivors. (Coalition Note: Specifics on treatment and follow-up were not discussed due to time constraints, but this is high on the priority list in follow-up conversations.)

Highlights from Peace Corps’ updates include:

Peace Corps officials at the meeting appeared to be engaged and committed to Volunteer safety and security.

“I’m cautiously optimistic,” says Coalition member Karen about the tone of the Peace Corps meeting and commitment to continue a working relationship.

The work has only just begun. 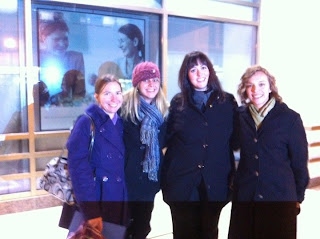 [First Response Action advocates for a stronger Peace Corps response for Volunteers who are survivors or victims of physical and sexual violence. We envision a Peace Corps with policies that reflect best practices in all areas of training, prevention and response. For more information email firstresponseaction@gmail.com]